When I took my first drawing class in high school, I sat next to a girl who like me, enjoyed drawing anime characters. She would start with the eyes, sketching out one eye and then the other. Then she would notice that the eyes didn't line up. So, she would erase both of them and try again.

After multiple attempts, there would be these huge eraser burn marks in the area of the paper where the eyes were suppose to be. Seeing that the paper was ruined, she would ball it up into a wad, and try again. Crumpled paper balls would surround her. She didn't finish much artwork, and it often seemed like she was working in circles.

Recently for me, creating stories feels a lot like that.

I've known for awhile that my approach to making stories is full of problems. Some of that is just a part of learning and trying to improve. Below are my biggest personal issues when it comes to writing and some notes about what I'm trying to do to make things better for myself. 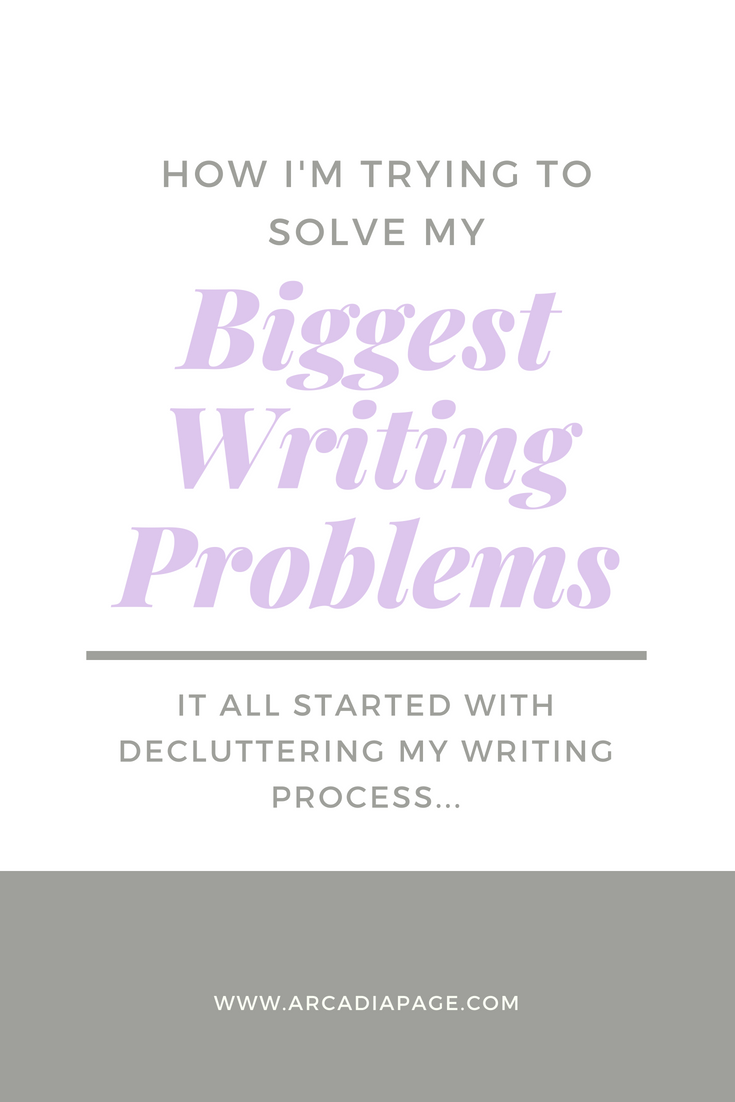 I had no clue that I had a problem organizing my writing projects until I came across Decluttering for Writers by Victoria Fry. Something about the subject struck a chord with me. After gathering my far flung pieces of writing from old printouts to buried digital files, I realized that decluttering my story projects was something I seriously needed. I So NEEDED This.

Although the process was stressful, the reward was not only enjoying a review of my progress, but also getting a clearer picture of my workflow.

I appreciated seeing how many snippets of stories and false starts I usually make before creating anything good (It's a lot!). That's something I tend to forget about and gloss over when it comes to my process. So next time I announce, "I have a new story idea that I'm working on!" take it with a huge grain of salt. Be prepared to see some ugly work. It takes several re-envisionings of a project before it turns out okay.

For example, parts of Mascara came from a terrible novel I had written earlier which I had totally forgotten about. And I’m currently, uh... re-envisioning, The Alternate Realities of a Dream Maker, which I jumped the gun and published before I allowed my natural cycle to run its course.

It also makes me want to be more conservative about sharing my new projects because most likely I'll work on it, destroy it, work on something similar, destroy that too. And then mess up some more stuff before I find what works.

Not Having a Backup

I store all of my stuff on Google Drive from the start, but as a tech person, I've always believed in having a secondary backup besides the cloud. You never know when you could be in the situation of having to restore data without internet access. Although I knew what I should be doing, I wasn't doing it. However, after I reorganized my story projects, everything is stored together. Now making backups of my work is a breeze. I back up all of my story stuff to a 32GB flash drive using the free version of EaseUS Todo Backup.

Decluttering my writing stuff not only involved whipping my project storage into shape, but it also meant digging through my writing books and writing article collections. Advice that doesn't fit with my approach to writing goes in the bin.
While reading through all of this stuff, I came across a wonderful piece of advice that addressed the inertia I was struggling with. It was the point that writing 250 words every day adds up to around 91,000 words a year.  91,000 words is almost two 50,000 word novels.

Do you know how long it takes for me to write 250 words? Around 15 to 20 minutes. If I'm feeling especially contemplative, it could take a little longer. After doing the math I realized that I have no excuse not to be making progress on my fiction. So now I've been writing the new rough draft of The Altered Realities of a Dream Maker more regularly because even a half page of writing matters.

Not Writing in a Way that Makes Me Feel Comfortable

I enjoy writing by hand. However, I've learned that I like writing the most exciting parts of my story first and then going back to fill in the transitions. So for awhile I was in a tug of war between typing my story to write my favorite parts and writing linearly to get the pleasure of writing by hand.
Then Decluttering for Writers reintroduced me to the concept of using notebooks with perforated pages. It was a obvious fix. I bought this handy notebook by Dingbats from Amazon*, and I love it. I can write whatever I feel like, rip out the pages, and put them in order. Then I can type up my story. I also use brackets around information I want to have in my story, but I'm not ready to give full attention to yet. Then I can keep moving forwards even if my words aren't perfect yet.

As I decluttered and organized my work, I was also surprised by how many comics I had started and stopped. I gained a greater appreciation of how much telling stories visually is a part of me. So I began to search out ways to make my story plotting and planning a more visual process, even if I am not making it into a comic. This includes making mind-maps, collecting pictures related to my story, and creating word lists that capture the feel I want my story to have.

After all of the decluttering and organizing, I came to appreciate the beauty of recycling. I have an archive of unfinished projects—projects that I didn't complete and have no intention of returning to. But now that I've gathered all of those old projects together, they've become a useful resource.

Parts of these old projects can be reused in my new projects. Abandoned characters and settings can be given a second life in a new story. Snippets of stories can be used as writing prompts.

So now, I’m able to continue writing with more focus because I have a clear view of my process. It’s really great. Six months from now I’m going to review how I’m approaching my writing to see what’s working or not, and if I need to make any changes.


*This post contains affiliate links. I only link to products that I've personally tried and enjoyed.
Tags: Productivity & Simplicity On Writing

✨Have some thoughts on this post? Reply with an email✨


Using Lists to Be a More Organized INFP Writer

How to Combine Digital Notes with Analog Notes

Too Busy to Write? Here are 4 Flexible Writing Schedules to Try

Using Journaling to Transform How You Plan for the Day