Sometimes while working on a fiction project, you can hit a point where you lose sight of your story. You can miss that excitement you had when you first started it, or something about the story doesn't feel right anymore.
As an INFP, ideas often come to me non-chronologically, and that can make writing challenging sometimes. However, I've found that taking a short retreat is a good way for me to reorient myself and make sense of my story.
My favorite guide to going on a DIY writer's retreat is the one E.M. Welsh shares on her blog. I like that the retreat is just for a weekend. It's easy to plan, pressure free, and effective. There's no need to hop on an airplane or rent a cabin out in the woods.
If you want to give the weekend writing retreat a try (and I strongly suggest you do), check out this post on her website.
And I have to say that the only way I learned that her post existed was via the post "What I Learned From My DIY Writing Retreat" by Rachel Giesel, so you may want to check out that as well.
Here are four things I learned by going on a short retreat: 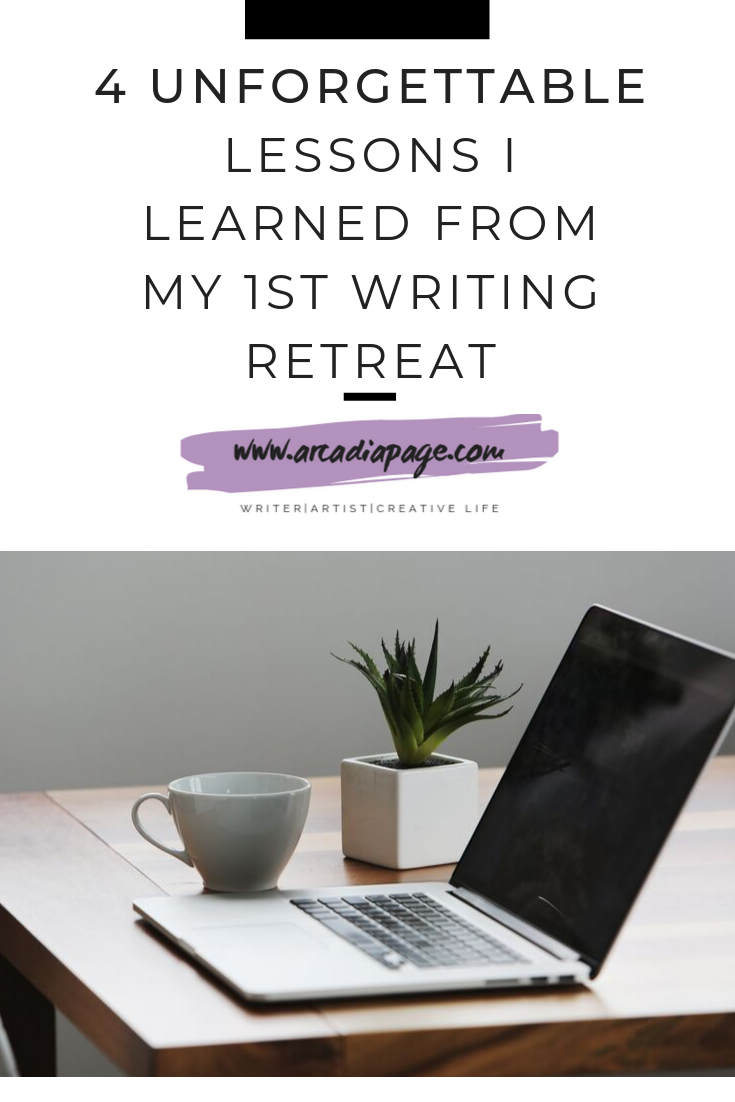 1. A writer's retreat can help you make meaningful improvements to your story

Meaningful doesn't necessarily mean big. Sometimes it's the smallest fixes that can lead to big improvements.
During my retreat, I set the simple goal of giving names to all characters and places in my story. It was something basic that my story was missing and that I wanted to get done.
However, once I started rounding up my characters, I realized that I had story information scattered everywhere. Some stuff was on Trello, other stuff was on Pinterest. I had character info in digital files and in paper file folders.
So in trying to come up with names for my characters, I also discovered ways I could better centralize the information for my story.  Going on the retreat helped me to bring all of my story information together, look at what I currently have, and then think about what I need next.
Welsh also suggested spending some time to focus on one of your characters. I picked the main antagonist of my story. I feel that devoting time to thinking about one character has made my story stronger overall.

2. A writer's retreat can help you rediscover your excitement for writing

In two days I was able to renew my enthusiasm for my story and fix some of the problems that were holding me back from making progress.
During the retreat, along with focusing on what was missing in my story, I also set aside time to write. I decided to write an hour a day using the methods I shared in my post How to Build a Productive Writing Routine.
Welsh encourages spending time in nature during the retreat, and I found this to be the perfect match for making time to think deeply about my story. Just having the space to think about writing helps with overcoming that fatigue that can set in from working on a story for a long time. And thinking about what I am trying to do builds my internal motivation to keep working on it.
When I get to trudging through the middle of my story, having another writer's retreat planned will do me a ton of good.

3. A writer's retreat can remind you of why storytelling is awesome

This writing retreat is the perfect balance between working hard and enjoying stories.
Welsh suggests taking in a story that matches the medium and genre that your story fits in, and then taking in two other stories that are different that challenge the story that you're working on.
For example, the current story that I am working on is a cyberpunk light novel.
So first, I decided to get general inspiration from the work of Little Foolery. Their style of light novels, the way prose is combined with comic style art, is what I mainly had in mind.
Then as a twist, I read Everything-Everything by Nicola Yoon. It's an illustrated novel, and I learned a lot more about how far I can push bringing together prose and art. This novel also helped me with making some important decisions as to if I wanted to use the 1st person past or the 1st person present tense in my story. It also impacted how I decided to structure my chapters.
Then last I read the Japanese light novel, Kino no Tabi by Keiichi Sigsawa . When someone uses the term "light novel," usually they are thinking of these works of writing from Japan. This book is lightly illustrated, and it taught me some fascinating things about using point of view and story structure creatively.
I read all three of these books casually. I took time to read out in nature, in bed, and while taking a luxurious bath with bath bombs. But being a writer, my brain analyzes stories even if I'm not trying.
So the wonderful pay off of reading the works of others during my retreat is that I was able to make important decisions about how I am going to craft my current story.

4. The benefits of a retreat are long lasting

Post writing retreat, I have been working on my story a little bit everyday for the past three weeks. I feel motivated and focused. I have direction with my writing, and I have a clearer vision of what I want.
The last day of the retreat, I took time to reflect on the experience by journaling. I asked myself, What did I learn? What changes do I want to make to my story? And, what improvements can I make to my writing process?
I am also a polymath/multipotentialite. So naturally, the flexible format of this retreat inspired me to adapt this method to other kinds of weekend retreats.
I think it would be awesome to do an artist retreat or a solo-prenuer retreat. Or even a sewing retreat! I also want to try an "out and about" writing retreat. So instead of staying at home, I hit the library and coffee shops instead.
Have you tried going on a writing retreat? Share your thoughts in the comments!
Tags: INFP & HSP On Writing
Share: Twitter Facebook


I'm Now Available to Join You on Your INFP Writing Journey

How INFPs Can Use Journaling for Healing

25 Ways to Thrive as an INFP Writer