Have you ever started a project thinking, “This (story, painting, song, book or whatever else you’re trying to make) is the one I’m going to stick with until the end“? But then, days later, you get a new brilliant idea that makes the old one seem lame, so you ditch the old one to chase something new, and the cycle continues…

I’ve been there so many times. Sometimes I’m okay with the chase, especially when new ideas bring some much-needed fresh energy to my creative life. But other times, the sensation of not being able to stick to anything is such a drag, and it gets tiresome.

If you’re feeling worn out from the cycle of project abandonment due to the onslaught of new ideas, here are some tips that I’ve found helpful.

This is a concept I picked up from the awesome book, The Art of Aliveness by Flora Bowley.

Often we focus on what’s not working when it comes to our projects. As a result, when something new and more appealing comes along, we are quick to drop whatever it was we were working on.

But how about, instead of completely abandoning the old unfashionable project, you shifted your thoughts to what parts of it are actually good? Which aspects of this project are working?

If nothing is working, then yes, it may be good to let it go. But if parts of it is working, maybe it would be better to maximize what’s good and remove from your project what you feel is weak.

Overall, focusing on the good aspects of an older project can help you to build an attachment to it. Then, when those persuasive new ideas come along, you may not be so quick to jump on them because you see the good in what you’re currently doing.

While you’re at it, also pay attention to why you feel that certain parts of your project work. What do you like about those parts? Why do you like them? How can you bring more of what you like to the current project or even future projects?

Take time to deeply appreciate what works, because when you understand why you like parts of your project and why that matters, it becomes easier to pick up on what you desire from your projects in general.

Be a Curator Instead of a Collector

Not having boundaries for which projects you will actually start can be a problem. It’s like going to the store without a list. You end up grabbing everything except what you need.

It’s important to realize that getting a new project idea does not automatically mean dropping everything that you’re working on and starting on it. In fact, the longer you let new ideas sit around, the easier it is to filter them.

Of course, how you decide to filter your ideas is a personal choice. But here are some of my personal boundaries for which ideas can be officially turned into projects.

At the start of last year I was working on a book, but I abandoned it because the concept for my last book, Thoughtful Planning, kept tugging at me. It was a struggle because I wasn’t sure if I was just being flaky. But when I started the new book and writing came so easily, I knew that I had made the right choice in abandoning the book that I was working on.

Also, randomly coming across helpful information related to your idea may indicate that it’s ready to be turned into a project.

And one last thing to consider:

Will this idea take me where I want to go? Some of the ideas we have may be related to places we want to go in life. Those can be physical places or goals.

But if an idea has the power to take you closer to a life that you want to have, this is also an invitation to give it a closer look.

So if you’re feeling overwhelmed by the chase, slow down, focus on what’s already working, and give the idea time to prove it’s worth.

It’s okay not to rush with your ideas because you’re really not missing out. There’s plenty more where that came from.❤️

Just for fun, I’ve also created a printable to go along with this post. Hopefully, it’ll help you to see what’s great about what you’re already working on. 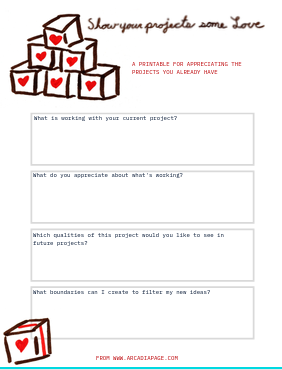 
Two Simple Self-Reflection Questions for Connecting With Your Intuition

What to Do When Your Day Doesn't Go as Planned

Why Breaks are Essential for Me as an INFP

How to Tell if a Weekly Planner is for You